NEW YORK — Retailers with a brick-and-mortar presence captured approximately 75 percent of all sales transacted over Thanksgiving weekend 2017, according to a report by the International Council of Shopping Centers (ICSC) released Monday, Nov. 27.

Combined, online and brick-and-mortar retail sales during Thanksgiving and Black Friday clocked in just shy of $8 billion, an 18 percent increase over the same two-day period in 2016, according to Adobe Analytics, which measures transactions of the 100 largest American web retailers.

The ICSC report found that over the course of the weekend, more than 145 million Americans shopped at malls and shopping centers — 105 million on Black Friday alone — where they spent an average of $377.50 per shopper.

Approximately one-quarter of the average shopper’s total expenditure went to dining and other experiences. All told, consumers spent an average of $78.70 per head at dining and entertainment destinations in association with Black Friday 2017.

“Shopping centers across the country should feel very optimistic about the season ahead,” says Tom McGee, president and CEO of ICSC. “What we are seeing over the course of the year, and more so during the holiday season, is consumers’ desire to take advantage of everything a mall has to offer, whether that is dining, shopping or entertainment.”

Approximately 74 percent of shoppers spent the same or more than they did in 2016. In addition, consumers visited an average of six stores during their 2017 shopping sprees, as opposed to four in 2016.

Roughly 25 percent of shoppers capitalized on omnichannel distribution by purchasing items online and picking them up at the store’s physical location. Among those who opted for this “click and collect” approach, nearly 70 percent made an additional purchase while in the store. 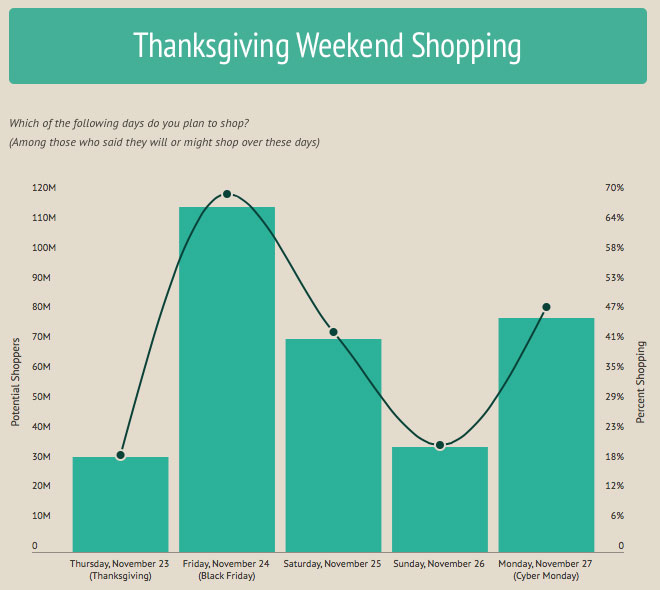